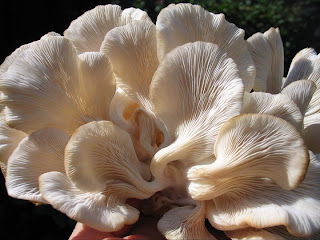 1.  Introduction
A model scheme for cultivation of Oyster mushroom (Pleurotus spp.) with commercial viability and being bankable has been prepared keeping in view the Agro-climatic conditions and other related aspects for successful cultivation of the mushroom and its subsequent marketing. The model proposed is to be initially  implemented in the districts of Patna and Lakhiserai. Mushroom has been identified as  an activity for financing under SGSY in Lakhiserai. Apart from this, cultivation of mushroom can be taken up on a large scale by individual entrepreneurs also. The agro-climatic conditions as well as local availability of raw material makes mushroom cultivation an economically viable preposition in these districts.
Mushrooms, also called ‘white vegetables’ or ‘boneless vegetarian meat’ contain ample amounts of proteins , vitamins, fibers and medicines. Mushroom contains 20-35% protein (dry weight) which is higher than those of vegetables and fruits and is of superior quality. It is considered ideal for patients of hypertension and diabetics.
Mushroom offers prospects for converting lignocellulosic residues from agricultural fields, forests into protein rich biomass. Such processing of agro waste not only reduces environmental pollution but the by product of mushroom cultivation is also a good source of manure, animal feeds and soil conditioner.
Mushroom has a huge domestic and foreign market. It is estimated that there is a world market for 20 lakh tonnes per annum in which the contribution of India is negligible. In the domestic market also the availability of mushroom is limited to cities and big towns only. Mushrooms can be not only in raw form but also in dried form. There is huge international demand for dried mushroom and the farmers gets a farm gate price of around Rs.250 per kg for dried oyster mushroom. There are exporters in the market who are willing to supply the spawn (seed material) and also buy the dried mushrooms.
The cultivation of Oyster mushroom or Dhingri mushroom or Pleurotus spp is relatively simple and it can be a homestead project. The agro- climatic conditions prevailing in Bihar is conducive for mushroom cultivation especially during the months of  September to March when the temperature is 20-30 C and relative humidity is 70-80%. The production gradually decreases during peak periods of cold from 25 December to 14 January. Even during this period, cultivation of cold tolerant strains can be adopted. Considering its suitability to the agro-climatic region and its potential to generate employment and income, a bankable model on cultivation of oyster mushroom has been since prepared.

Pleurotus spp. is one of the choice edible mushrooms which can be cultivated in the tropics.  It has gained importance only in the last decade and is now being cultivated in many countries in the subtropical and temperate zones.  In Europe it is known as the oyster mushroom (P.ostreatus), while in China it is called the balone mushroom (P.abalonus or P. cystidiosus).  Several other species are now available for cultivation.  These are P.sajor-caju, P.florida (probably a variant of P.ostrcatus), P.sapidus, P.eryngii, P. columbinus, P.cornucopiae, and P.abellatus.
The different species of Pleurotus are suited to growing within a temperature range of 15 to 30oC, P.sajor-caju is tolerant of a tropical temperature of 28-30oC although, it fruits faster and produces larger mushrooms at 25oC during the cooler months of the year or in the highlands of the tropics.  This is the species now popularly grown in the tropical Southeast Asian countries, including India.  P.abalonus prefers lower temperatures of 22-24oC and is most popular among the Chinese.  P.ostreatus is the so-called low-temperature pleurotus, fruiting mostly at 12-20oC. This species is more suited to the temperate climates of Europe and the United States, although many growers in the USA are also producing P.sajor-caju.
Like the other mushrooms, Pleurotus spp. can be grown on various agricultural waste materials, with the use of different technologies.  They grow well on different types of lignocellulosic materials, converting the materials into digestible and protein-rich substances suitable for animal feeds.  Pleurotus spp. may be produced in the tropics on a mixture of sawdust and rice bran, rice straw and rice bran, saw dust and ipil-ipil leaves and other combinations of tropical wastes.  Other wastes such as corncobs, cotton waste, sugarcane bagasse and laves, corn leaves, grasses, rice hulls, and water hyacinth leaves are also good substrates for growing this mushroom (Quimio, 1986).  The substrates used in each region depend upon the availability of agricultural wastes.

Sterilization / Pasteurization
The use of a pressure cooker to sterilize Pleurotus substrate is not recommended since sterilization kills beneficial micro organisms which are present in the substrate, as well as the harmful ones.  In addition, nutrients in the compost are broken down by sterilization into forms more favorable for the growth and development of competing micro organisms (FAO, 1983).  Thus, substrates that are sterilized are easily contaminated unless spawned under very aseptic conditions, as in media and spawn preparation.
Steaming at 100oC (pasteurisation) is more acceptable because the cost is lower (the steamer may only be an ordinary large-capacity casserole or a drum) and substrates thus steamed are less susceptible to contamination.  The substrate is steamed for 2-3 hours, depending on the volume and the size of the bags.  When using a lower temperature (60-70oC) as in the case of room or bulk pasteurisation, the substrates, whether in bulk or already packed in bags, are steamed for at least 6 to 8 hours.  Plate 11 shows a range of low-cost steamers designed for the tropics.

Inoculation / Spawning
Spawning is carried out aseptically; preferably using the same transfer chamber or the same inoculation room as is used in spawn preparation.
Grain or sawdust spawn is commonly used to inoculate the substrate in bags.  With grain spawn, the bottle is shaken to separate the seeds colonized with the white mycelium.  After lifting the plug and flaming the mouth of the bottle, a few spawn grains (about 1 to 2 tsp.) are poured into the substrate bag.  Both the plug of the spawn and the plug of the compost bag are replaced and the next bags are then inoculated.  The newly inoculated bags are slightly tilted to distribute the grains evenly in the shoulder area of the bag around the neck.
For sawdust spawn, the spawn is broken up with an aseptic needle.  A piece of the spawn may then be transferred, using a long flat-spooned needle especially designed to scoop the spawn.  One bottle of grain or sawdust spawn in a 500-ml dextrose bottle is sufficient to inoculate 40 to 50 bags.
The highly industrialized method involves bulk-pasteurisation and bulk-spawning before the substrates are distributed in beds similar to those used for Agaricus.  The system is labour-saving but requires more complex equipment.  Bulk material processing and handling are highly risky for tropical mushroom cultivation due to the risk of contamination.

Fruiting
A mushroom house should be used and its size will depend on the number of bags prepared at any one time.  The house may be built of Nipa, sawali, wood or concrete.  Air vents on the upper walls will provide the ventilation required for the development of the sporocarps.  At the same time a small amount of light should be provided inside the house.  The walls may be covered with plastic or foam sheets to increase the relative humidity (80.95%) in the production house.
Shelves, made from bamboo or wood, line both sides of the house.  The shelves are on bamboo frames, one shelf above the other, with about 40-50 cm space between them.  They should be strong enough to hold the bags or blocks containing the compost.
The bags are opened by removing the plug and the PVC pipe neck, then rolling down the mouth of the bag.  Alternatively, the mouth portion may be cut off with a razor blade, or the bag may be slit either criss-crossed at four to six places, or simply slashed lengthwise.  When following the latter technique, the bags may be suspended with a rope or string.  When using blocks instead of bags, the blocks are opened either completely or with only the surface or upper portions exposed.
Fruiting requires an appropriate temperature range (20-28oC), ventilation, light moisture and humidity (80.-95%).  To provide moisture, daily watering of the substrate is required.  Watering, however, should not be so excessive that the substrate becomes waterlogged.
If the temperature inside the house rises to more than 30oC, a light water mist should be frequently used to lower the temperature and hasten fruiting.  Doors and windows may also be opened, especially at night, to allow the cool night air to enter.
Approximately 3 to 4 days after opening the bags, mushroom primordia will begin to form.  Mature mushrooms should be ready for harvesting in another 2 to 3 days.  If the substrate has not yet been completely colonized, the onset of fruiting will be delayed.
To harvest the mushrooms, they should be grasped by the stalk and gently twisted and pulled.  A knife should not be used.  If kept in a refrigerator or in a cool place, the mushrooms should remain fresh for up to 3 to 6 days.
After harvesting from the top end of the bag, the other end may be opened to allow fruiting.  The two ends are sometimes opened and allowed to fruit at the same time.  After harvesting from the end portions, slits may be made on the central portion of the bag so that more mushrooms can develop.  When a sawdust substrate is used, the harvested surface may be scraped lightly to expose a new surface for fruiting.  As long as the substrate appears white, mushrooms will continue to form under adequate environmental conditions.  When it appears colorless and soft, it is time to remove the bags from the house.

Yield
Yield ranges from about 100-200% of the dry weight of the substrate and depends on the substrate combination as well as the way in which the substrate has been managed during the fruiting season.  From personal observations, the richer the combination and the whiter and denser the mycelium, the greater will be the mushroom yield.
To increase yield, the most common supplement used is urea or orchid fertilizer dissolved in water (100 gm in 100 liters water).  Using a plastic mist sprayer, the solution is sprayed on the surface immediately before fruiting.